A Quick And Efficient Guide On Hiring PA Systems In Sydney

The concept of hiring public address systems is not so new but with the rapid advancements in technology we have got the best for your use at the lowest possible prices. 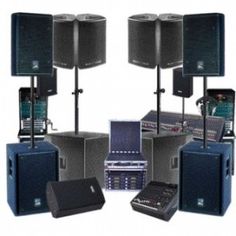 There are varying types of public address systems and you can hire PA system Sydney of any choice. Small systems are generally used in smaller venues like school auditoriums, churches, small bars, small public gatherings etc. whereas public address systems with many speakers are widely used to make announcements in public places like railway terminus, large institutional areas etc.

Even intercom systems installed in many buildings have microphones of their own allowing occupants to respond to announcements. Even sound reinforcement systems and PA systems at times use alike components but the applications may differ.

The Earliest Days of PA Systems

The early days public address systems were developed and experimented in the early days of the 20th century. Edwin Jensen and Peter Pridham began these experimentations with sound reproduction working from a laboratory in Napa, California.

Their first experiment was done using a carbon microphone. When they first connected it to a twelve voltage battery they realized acoustic feedback.

The public address systems consist of input sources like the amplifiers, control and monitoring equipments and the speakers or loudspeakers. The primary input source is the microphone for the live announcements and the source for recorded sounds. Hire PA system Sydney and experts do all the professional work including the sources of input which are then passed onto the pre amplifiers and the signal routers which in turn determine each zone into which it is being fed.

The same control system is also used for the separating zones in a Public address system and the loudspeaker is used a means to transform or convert the electric signals into the sound. However large public address systems are used as a means of alert in big areas of work.

Why You Need to Rent Them?

PA systems comprise a lot of items and managing each of them is really difficult. The first issue is that of the space. PA systems consist of many items and the kind of space required to keep them or to maintain them in a good piece is not everyone’s cup of tea. Next is the big factor of pricing. No individual would like to shell out loads and loads of money from his or her own pockets for a mere public gathering address using a PA system.

Next is the factor that every item needs an expert to operate it. Technicians, sound analysts, fixers, transporters are required to set up the area of addressing. All of these bear a huge cost and renting seems to be the best idea in the case of public address. So do not wait and hire PA system Sydney.

Enquire about computer and technology rentals today! We rent as well as hire IT Equipments in Sydney, Melbourne, Brisbane, Newcastle, Canberra, Hobart across all major cities in Australia.

Enquire about our managed services today! We do Managed IT Desktop Support, Network Setup & Configuration, and Security services across all major cities in Australia.

Enquire about our professional services today! Our services is available across all major cities in Australia.

Enquire about all your rental, hire, on-site support, remote support requirements today! Our services is available across all major cities in Australia.